Navigating the VA and DoD system can be a daunting process, and my staff and I are here to assist by connecting you with Veteran Service Officers (VSOs) who can help you through the process and make sure your applications and filings have been received.  My staff has been successful in assisting many veterans who had issues with VA/DoD benefits. We encourage veterans to call our office if they need assistance. Here are a few examples of how my office has been able to help constituents with casework recently:

One constituent in Federal Way had been working with their family for over ten months to receive a Survivor’s Pension from the VA. With the costs of her medical care on the rise, the constituent needed a resolution quickly. I contacted the VA on my constituent’s behalf seeking an update on the request. After a month of correspondence with VA, we were informed that they had granted the constituent’s claim for Survivors Pension. The VA provided retroactive pay and initiated monthly benefits. This helped ensure that my constituent could continue to receive the care they needed.

In the winter of 2010, another constituent was grieving the recent loss of their spouse, a veteran who passed away in a local hospital. The constituent reached out to the VA for help with her late spouse’s hospital bills but was getting nowhere. Earlier this year, my office contacted the VA on the constituent’s behalf, seeking an update on the status of the request and asking for a timely resolution. After a careful review, the VA informed us that the case was resolved and that the bills would be processed for payment.

“I contacted Congressman Smith for his help on an issue with the VA that I could not resolve on my own. The experience I had with his office was wonderful—I just wish I had come sooner. I was treated like a human being and with respect, which didn’t happen in other places. If it wasn’t for the Congressman I feel like I would be dealing with this VA issue for the rest of my life. I couldn’t grieve the loss of my husband because of the stress and with your help we got the work done. A burden was lifted off from my shoulders when I called because I knew you cared.
Thank you!”
~ 9th District constituent

It is a great honor to work with and represent the brave men and women who protect the United States of America. As the Ranking Member of the House Armed Services Committee, I join with other members of the committee to pass the National Defense Authorization Act. One of my top priorities in Congress is to ensure that we take care of the men and women in our military, as well as those who have served. We have the best military in the world - it’s capabilities and the talent of those who serve in it is unparalleled. As Ranking Member, I am in the unique position of meeting with Democratic House Leadership regularly to help set our national priorities.

In October, I participated in a National Veterans Roundtable led by Leader Pelosi and Congressman Tim Walz. In attendance were representatives from Veterans of Foreign Wars and the National Military Family Association, among others.

This was an opportunity to have a productive discussion with veterans leaders from across the country and I spoke about the continued need for interoperability between DoD and the VA healthcare systems to best serve our veterans. 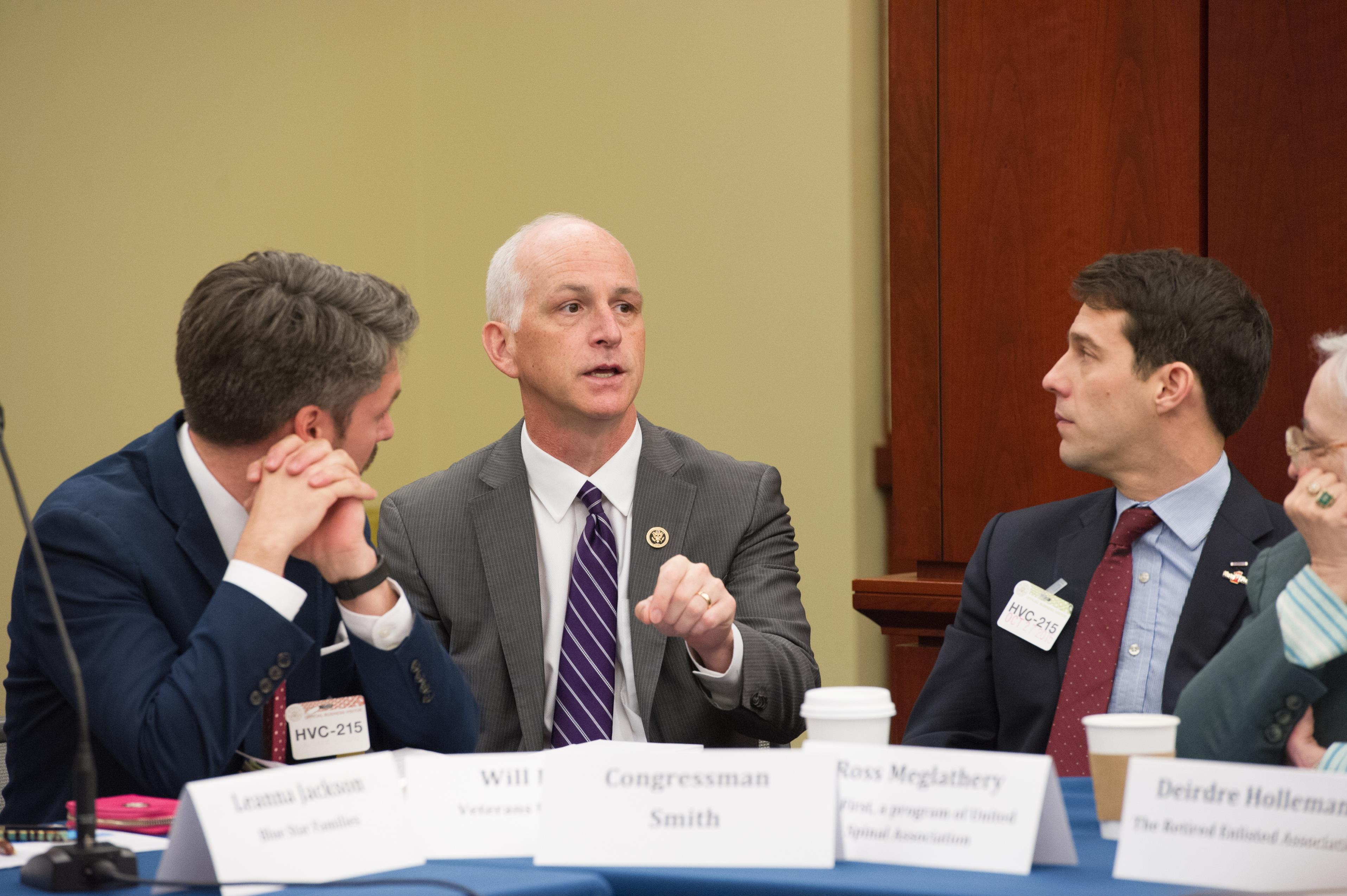 Adam speaks at National Veterans Roundtable in Washington D.C. to discuss the need to address interoperability between DoD and the VA in the FY 2017 National Defense Authorization Act.

It is critical that I continue to hear from my constituents about the issues most important to them. In order to best represent my district, please keep me updated on your priorities by contacting either my District or DC office or visit my website.

http://adamsmith.house.gov to send an email;